Something Fishy About the Pope´s Hat

The Origins of the Fish Head Mitre Hat 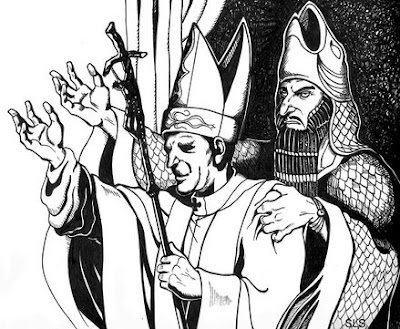 We will see where the Pope and the Catholic Bishop's Mitre has it´s origins from:
"Adapa was a mortal from a godly lineage, a son of Ea (Enki in Sumerian), the god of wisdom and of the ancient city of Eridu, who brought the arts of civilization to that city (from Dilmun, according to some versions)."
"Adapa is often identified as advisor to the mythical first king of Eridu, Alulim. In addition to his advisory duties, he served as a priest and exorcist, and upon his death took his place among the Seven Sages or Apkallū. (Apkallu, "sage", comes from Sumerian AB.GAL (Ab=water, Gal=Great) a reference to Adapa, the first sage's association with water.)"


"it is now known that the name is the Greek form of the Babylonian Uanna (or Uan) a name used for Adapa in texts from the Library of Ashurbanipal."
-Source: K. van der Toorn, Bob Becking, Pieter Willem van der Horst: Dictionary of deities and demons in the Bible Edition 2, revised, B. Eerdmans Publishing, 1999
"Adapa -son of Ea, priest in Eridu. Also known as Uan (Oannes), the first of the Seven Sages, who brought the arts and skills of civilization to mankind."
(p. 317. "Glossary of Deities...Adapa." Stephanie Dalley. Myths From Mesopotamia: Creation, The Flood, Gilgamesh, And Others. New York & Oxford. Oxford University Press. 1991)
Adapa is Oannes and one of the Seven "Sages" called Apkallu:
The Apkallu (Akkadian) or Abgal, (Sumerian) are seven Sumerian demigods said to have been created by the god Enki (Akkadian: Ea) to give civilization to mankind. They served as priests of Enki and as advisors or sages to the earliest "kings" or rulers of Sumeria before the flood. They are credited with giving mankind the Me (moral code), the crafts, and the arts.
They were seen as fish-like men who emerged from the sweet water Apsu. They are commonly represented as having the lower torso of a fish, or dressed as a fish. They have also been depicted with wings, having either a human head or an eagle's head. 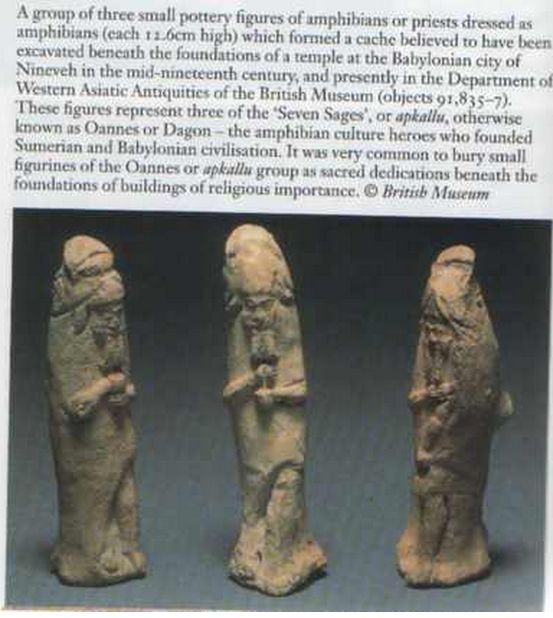 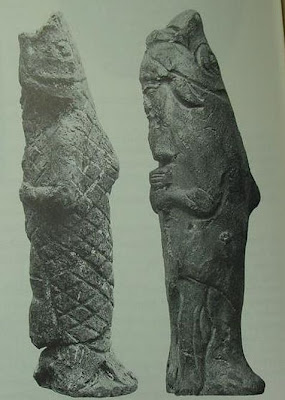 Fish-men figurines, the so-called "seven sages"  (apkallu), sun-dried clay, from the foundations of a priest's house in Asshur ca. 721-705 BCE (p. 18. Jeremy Black and Anthony Green. Gods, Demons and Symbols of Ancient Mesopotamia, An Illustrated Dictionary. London, British Museum, in association with the University of Texas Press. Austin. 1992. ISBN 0-292-70794-0. paperback).
Adapa (one of the Apkallu) was the son of Ea (Enki) the Sumerian Fish God 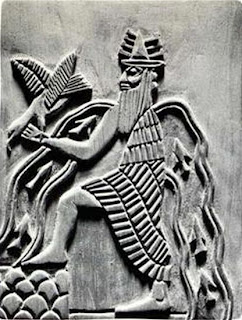 Enki was the patron God of the city of Eridu, the City of Eridu was founded by Nimrod
"David Rohl (an Egyptologist), like Alexander Hislop, identified Nimrod with a complex of Mediterranean deities; among those he picked were Asar, Baal, Dumuzi and Osiris. In Rohl's theory, Enmerkar the founder of Uruk was the original inspiration for Nimrod, because the story of Enmerkar and the Lord of Aratta bears a few similarities to the legend of Nimrod and the Tower of Babel, and because the -KAR in Enmerkar means "hunter". Additionally, Enmerkar is said to have had ziggurats built in both Uruk and Eridu, which Rohl postulates was the site of the original Babel. Enmerkar and the Lord of Aratta is a legendary Sumerian account, of preserved, early post-Sumerian copies, composed in the Neo-Sumerian period (ca. 21st century BC). It is one of a series of accounts describing the conflicts between Enmerkar, king of Unug-Kulaba (Uruk), and the unnamed king of Aratta (probably somewhere in modern Iran or Armenia). It is also notable for its strong parallels to the Tower of Babel narrative of Genesis."
Enki is just another form of Nimrod, son of Cush, grandson of Ham, and great-grandson of Noah; and as "a mighty one on the earth" and "a mighty hunter before God". This is repeated in First Book of Chronicles and the "Land of Nimrod", used as a synonym for Assyria, is mentioned in the Book of Micah.
"Nimrod figures in some very early versions of the history of Freemasonry, where he was said to have been one of the fraternity's founders. According to the Encyclopedia of Freemasonry: The legend of the Craft in the Old Constitutions refers to Nimrod as one of the founders of Masonry. Thus in the York MS., No. 1, we read: "At ye making of ye toure of Babell there was a Masonrie first much esteemed of, and the King of Babilon yt called Nimrod was a Mason himself and loved well Masons." However, he does not figure in the current rituals."
Priests in Fish robes were still prevalent even after Sumeria here are some examples: 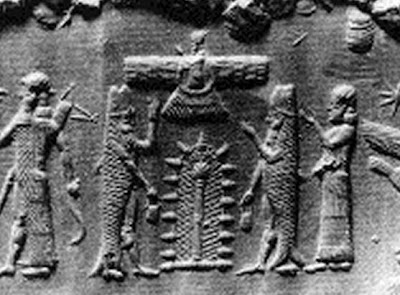 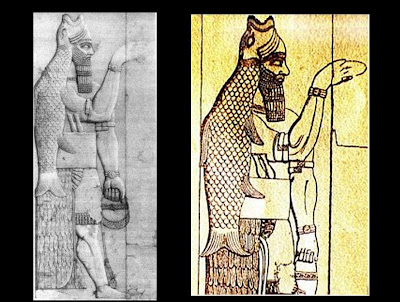 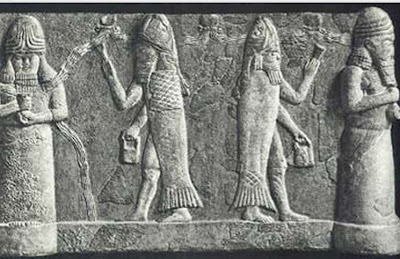 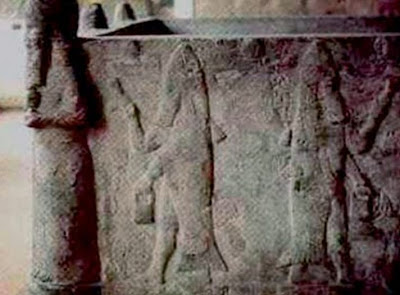 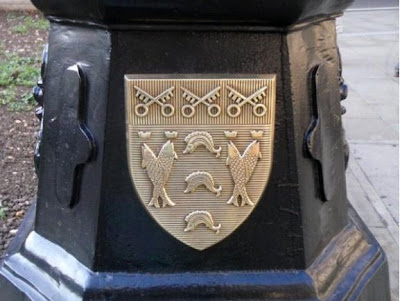 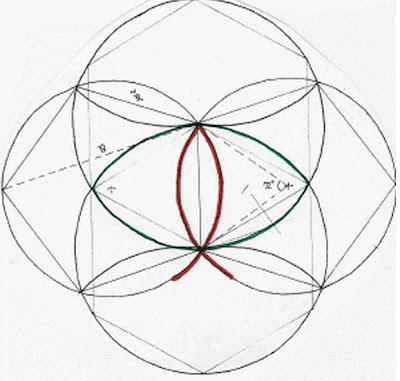 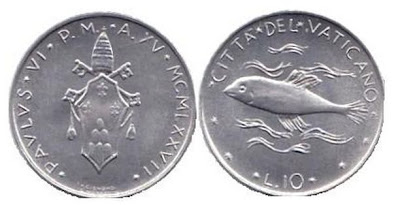 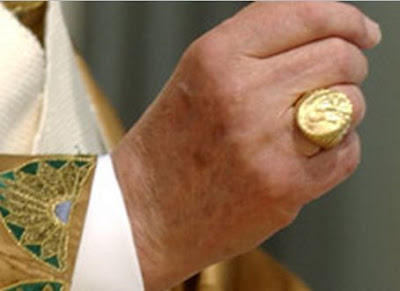 The Pope wears a "Ring of the Fisherman" mocking
Mark 1:17
"About the very time when the Bishop of Rome was invested with the pagan title of Pontifex, the Saviour began to be called ICHTHUS, of 'THE FISH', thereby identifying him with DAGON." (Hislop, p. 215) "The two-horned mitre, which the Pope wears…is the very mitre worn by DAGON."
(Hislop, p. 215) 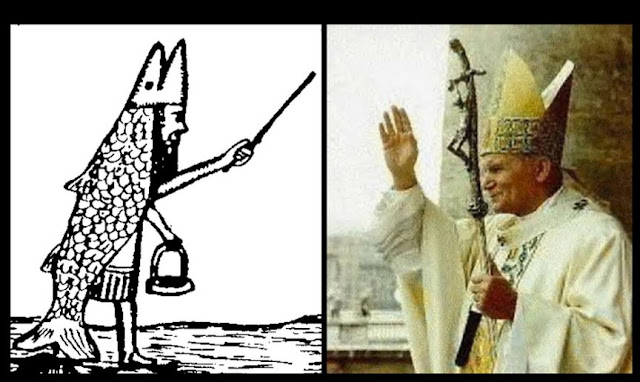 Heliopolis: The City of Saturn 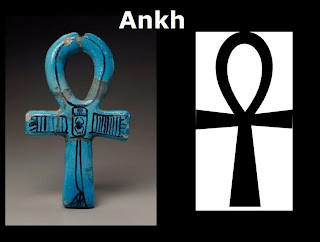 "The ankh appears  frequently in Egyptian  tomb paintings and  other art, often at the  fingertips of a god or  goddess in images that  represent the deities of  the afterlife conferring  the gift of life on the  dead person's mummy" 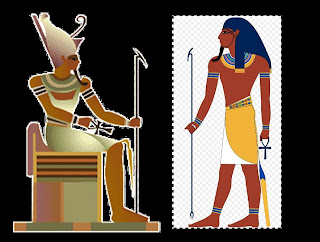 "The letter A in the word Ankh  stands for Atum-Re  "In the Heliopolitan creation  myth established in the sixth  dynasty, Atum was considered  to be the first god, having  created himself, sitting on a  mound (benben) (or identified  with the mound itself), from  the primordial waters (Nu).  Early myths state that Atum  created the god Shu and  goddess Tefnut from spitting  her out of his mouth"


"He is generally represented in  human form and as the source  of the Pharaoh's power he  wears the double crown of  Egypt- red for Lower Egypt,  White for Upper Egypt and he  also carries a tall cross, the  symbol of eternal life."


Heliopolis (Greek: Ἡλιούπολις,  "City of the Sun" or "City of  Helios" was one of  the oldest cities of ancient  Egypt  The name Heliopolis is of  ancient Greek origin,  Ἡλιούπολις, meaning city of  the sun as it was the principal  seat of sun worship to Re- Atum or Atum-Re, "the  evening sun".


Originally, this  ancient city was known by the  Egyptians as Iunu, from the  transliteration ỉwnw,  probably pronounced *Āwanu,  and means "(Place of) Pillars". 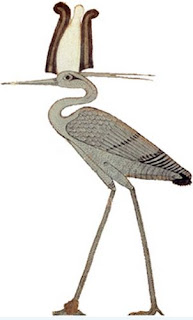 Benu (Bennu):  Egyptian phoenix usually  depicted as a heron, but also  as a peacock or an eagle. The  Bennu was linked with Atum  Re.  The brilliantly red and  golden plumed Bennu was the  sacred bird of Heliopolis.  Identified as a heron with its  long straight back and head  adorned at the back with two  erect feathers, the Bennu was  later named Phoenix by the  Greeks. 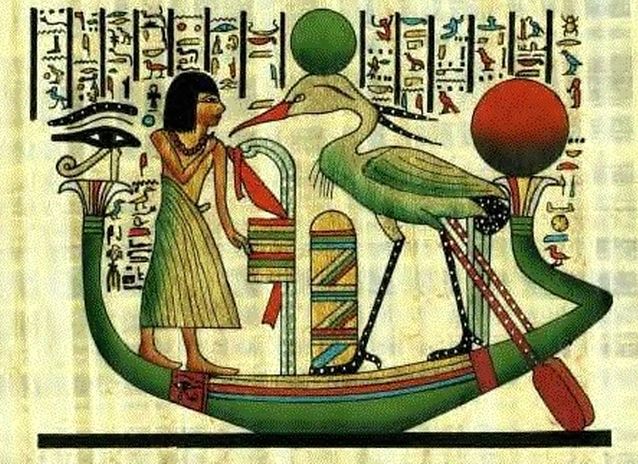 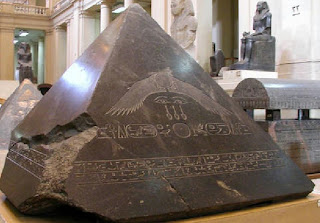 The most important temple in  Heliopolis was the “Mansion of  the Benben“, also known as the  “Mansion of the Phoenix“. In the  middle of the Temple in an open  courtyard, stood an Obelisk, on  top of which sat the “Benben  Stone“. The Benben stone looked  like a small Pyramid.  The Benben Stone was seen as  the solidified Seed of Atum, the  Stone of Creation. It was on this  stone that the Phoenix or Benu  Bird would return every 12.594  years and place its new Egg. At  that moment a new Era of  Mankind was started. The Benu  Bird came from the ‘Isle of Fire’,  the mythical place where the  gods were born.
Another important  Artefact of Heliopolis  was the sacred Ished  (Persea) Tree, The Tree  of Life, the Seat of the  Benu Bird. The Tree was  protected by the great  Cat, a Symbol of Ra. 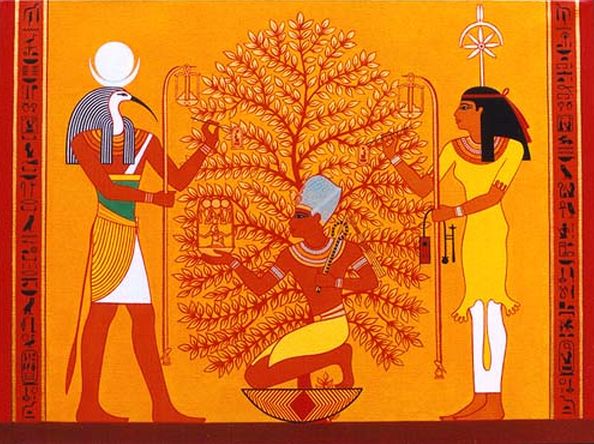 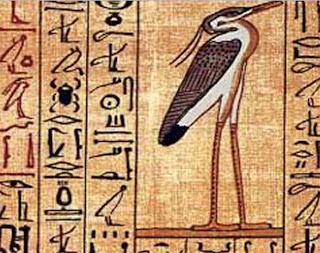 Some New Agers believe  that The Phoenix is  looking for the Benben  Stone to lay down its  New Egg that will trigger  a New Era of Mankind,  the Age of Aquarius, the  Water Bearer.
"In archaic copies of Plato's  Timaeus, the word for the  planet Saturn is Helios, the  "sun" god. Popular Greek  traditions identified Saturn as  Kronos, alter ego of Helios, and  Kronos is said to have ruled  "over the pole"  "Diodorus of Sicily reported that  the Chaldeans called Cronos  (Saturn) by the name Helios, or  the sun, and he explained that  this was because Saturn was the  most conspicuous of the  planets."
Atum-Re was the god of
Helios (Heliopolis)
Atum-Re is Saturn
Saturn is Satan 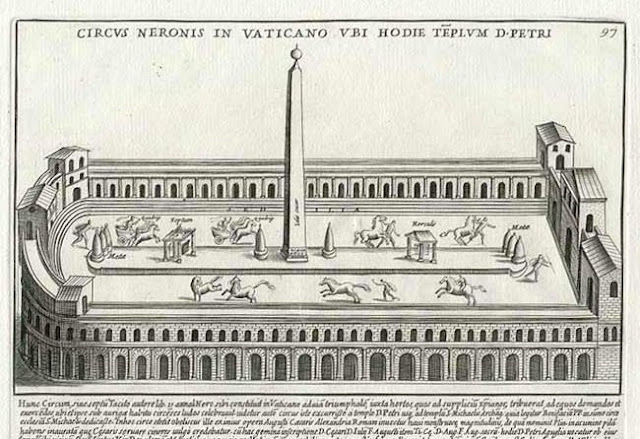 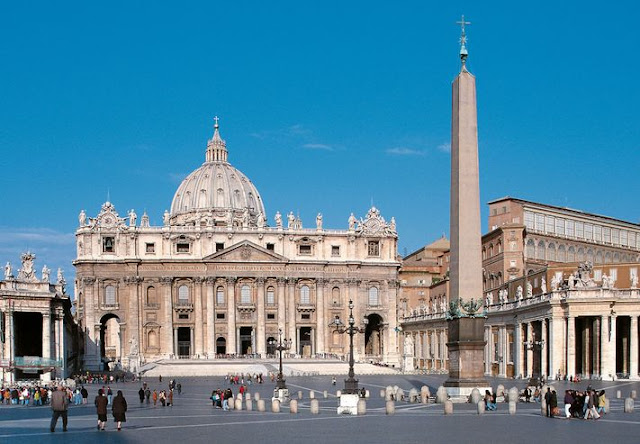 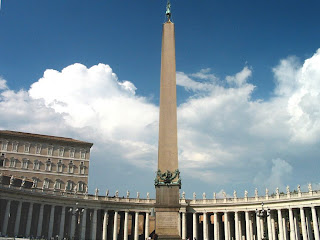 The Obelisk (Height: 83 feet Weight: 331 tons) in Vatican  City was originally erected at  Heliopolis by an unknown  pharaoh of the Fifth dynasty of  Egypt. The Emperor Augustus  had it moved to the Julian  Forum of Alexandria, where it  stood until year 37 A.D., when  Caligula ordered the forum  demolished and the obelisk  transferred to Rome. He placed  it in the center of the Circus,  where it would preside over  Nero's countless brutal games  and Christian executions. 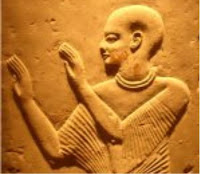 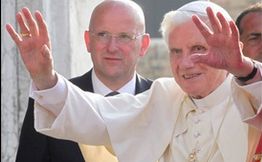 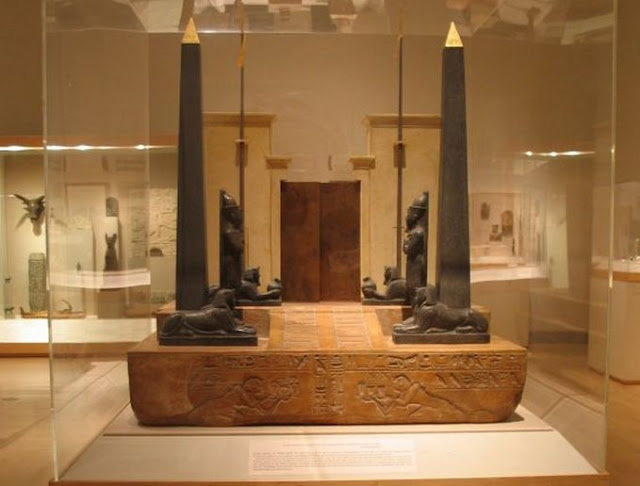 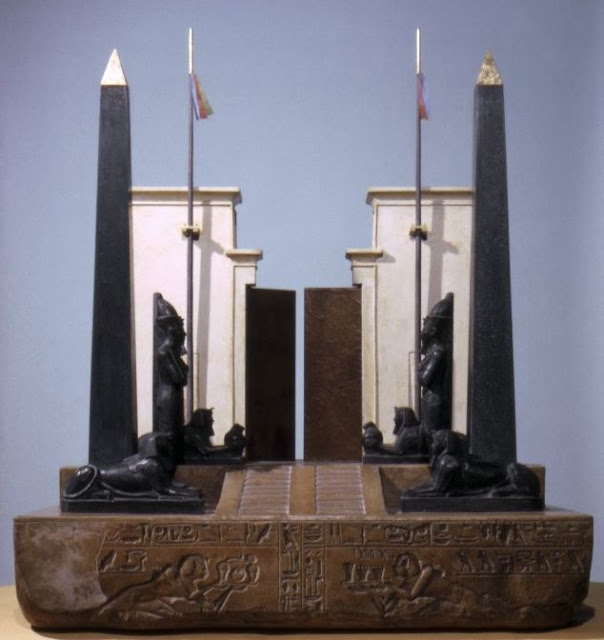