The Mystery of the Georgia Guidestones 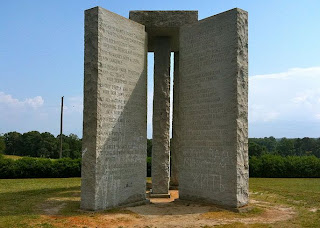 "The Georgia Guidestones is a large granite monument in Elbert County, Georgia, USA. A message comprising ten guides is inscribed on the structure in eight modern languages, and a shorter message is inscribed at the top of the structure in four ancient languages' scripts: Babylonian, Classical Greek, Sanskrit, and Egyptian hieroglyphs." 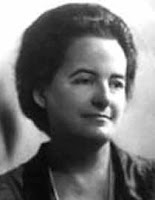 Alice Bailey, a disciple of Helena Blavatsky also claimed to have gotten in contact when Bailey was 15, of course the figure of Col. Olcott was alleghorical by this time and still much revered amongst Rosicrucians. Helena Blavatsky co-founded the Theosophical society and Alice Bailey founded the Lucifer Trust publishing company later renamed Lucis Trust, headquartered in 866 United Nations Plaza
source: Bailey, Alice. The Externalisation of the Hierarchy. NY (866 United Nations Plaza!): Lucis Publishing Co., 1982.
It is no wonder why Yoko Ono and others have praised the inscribed messages as "a stirring call to rational thinking," the wife of John Lennon  akin to Thomas Paine’s The Age of Reason (Yoko Ono was the wife of Communist and New Ager, John Lennon. The Beatles were known to be New Agers into Eastern Philosophy and consumed drugs)

"A message consisting of a set of ten guidelines or principles is engraved on the Georgia Guidestones in eight different languages, one language on each face of the four large upright stones. Moving clockwise around the structure from due north, these languages are: English, Spanish, Swahili, Hindi, Hebrew, Arabic, Chinese, and Russian.

We can clearly see that the guidestones mention a World court, these are the principles of a world religion under a world government with a world court, all backed by the Rosicrucians, another chapter of the Knights Templar.